After three days of deliberations last summer, a jury in northern California found Samsung had infringed several of Apple’s design and utility patents, awarding Apple over one billion dollars in damages (Verdict Form #22). Yet the decision is just one small piece of a mosaic of related intellectual property disputes between the tech titans that spreads across four continents and over twenty countries.

While many of the design and utility patents in the US litigation relate to graphical user interfaces or more broadly to user experience—underscoring a larger dispute between Apple and Google’s Android operating system—a lot of the litigation has been directed to more traditional industrial designs. The most commonly litigated (e.g., US & EU designs) and perhaps most contentious design relates to what Apple sells commercially as the iPad.

In the US trial, a jury found that this design patent was not invalid, but that it was also not infringed by two models of the Samsung Galaxy Tab 10.1 (Verdict Form #8 & #11).  Put simply, Apple walked away with its design patent intact but Samsung was not responsible for infringing it either.

One important aspect of the court’s validity determination was whether the claimed design was different enough from designs created before it to warrant protection.  In the US, this inquiry is framed by whether the design would have been obvious to an ordinary designer at the time it was created.  Based on some of the references identified in expert reports and trial briefs, the nine jurors would have answered this question while looking at images like those pictured below. 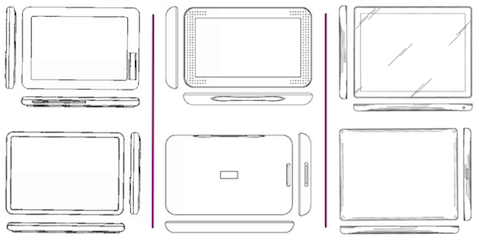 While this is an over simplified version of the evidence presented and the legal standard applied, it’s easy to understand why the application of creativity requirements can be highly contentious.  As a designer, how many times have you disagreed with a colleague about the creativity of a particular design and struggled to articulate your reasoning?  Now, can you imagine how difficult it would have been for a diverse panel of California residents—including a navy veteran, insurance agent, construction worker, electrical engineer, system’s engineer, homemaker, and a bike shop manager—to discuss and understand these issues?  If it were a simple matter of distinction between designs, perhaps an image searching algorithm could determine whether the design was too close to previous designs (e.g., think Google Goggles), but these legal standards inevitably reflect the personal and societal experiences of those making the determinations.  And, many would argue, they should.

In order to curb their uncertainty, many countries have purposely adopted lower creativity standards, while simultaneously decreasing the scope of the design’s protection. In theory, such a standard might grant protection in some cases where it is not warranted, but by decreasing the scope of protection it should balance out some of these false positives.  Other countries have kept their standards high, arguing that higher creativity requirements might result in not granting protection in some cases where it is warranted (i.e., false negatives), but that this subjectivity is balanced by an increase in competition and a robust public domain for future designers to build on.  In economic terms, this balancing act is all about calibrating the size of the carrot.

In an effort to better understand these idiosyncrasies, the Max Planck Institute could use your help with a new study that it is conducting.  The project revolves around a series of brief hypothetical juror scenarios where you are asked to apply some of the complex standards alluded to above. Don’t worry, they’ve stripped them down to their most basic forms for you.  At the end of the survey, they’ll also email you your results so that you can see how you compared to the actual court outcomes, and they’ll provide you with additional resources to learn more about other aspects of design protection and enforcement. In other words, it’s a fun way to test what you know about design law.  Regardless of where you stand on the Apple/Samsung dispute and the broader issue of issue of intellectual property protection in design, you should you should find the study fun and helpful.  Most importantly, all of the money generated by the study is being donated to design charities.

Get started now!
About the author: Located in the heart of Munich, Germany, the International Max Planck Research School for Competition and Innovation (IMPRS­-CI) is a doctoral program jointly offered by the Max Planck Institute for Intellectual Property and Competition Law, the Department of Economics, the Munich School of Management, and the Faculty of Law at the Ludwig Maximilians University (LMU). The IMPRS-CI contributes to interdisciplinary research at the interface of law, business administration and economics in the area of competition and intellectual property law.
{ 0 comments… add one }

Next post: New 3D Printing Template Marketplace Attempts to Commoditize 3D printing with the help of Designers and a Growing Printing Network