As a designer you have to communicate an idea and nurture it until it can stand on its own two feet. You’re just a foot soldier in the grander picture of innovative, renewing good vs evil resistance to change in all its forms. Sometimes you have to use your creative ability beyond the virtual world of CAD or even the workshop world of prototyping – sometimes you have to think about a mini production run. Then suddenly you’re confronted with high tooling set up costs because you designed for the long range scenario when your idea has sky rocketing sales and high volumes that can justify the high tooling set up costs. When you have to think about short production runs you’ve got to love laser cutting as a process because there is such minimal set up cost and yet high accuracy and repeatability. If you have sheet metal parts in your design it’s easy to bang out the parts with laser cutting and then with press brake folding there’s a lot that can be achieved without going to expensive stamping or pressing tools. Here is a trick that allows you to take that one step further and start to introduce some more funky options with your back-yard mini production run. This example shows how I made a super-cheap, super-fast pressing tool using laser cut parts and this allowed me to press a dish shaped part showed below – this part is about 40mm diameter.

1. The blank will be a laser cut part – if you use cold rolled steel it will be more malleable. In this example the thickness is 2.0mm. 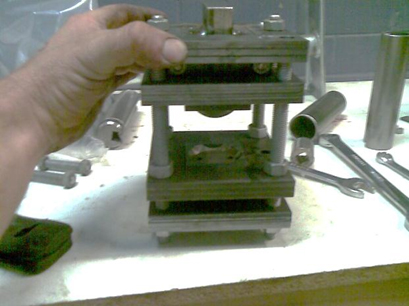 2. Now to look at the tooling. The basic idea is to produce a die set including a bottom half and a top half on guide pillars and the two halves of the die can be pressed together or hammered together using the blunt end of a crow bar for example. 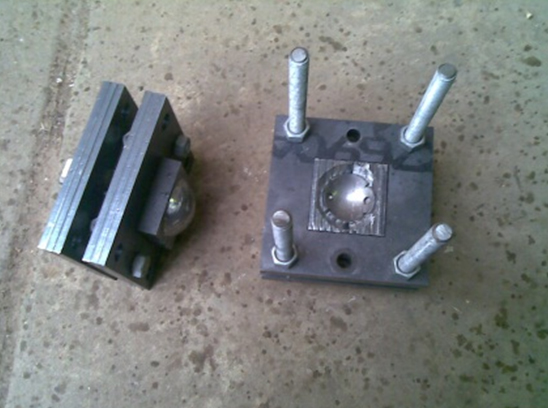 4. Using CAD you’ll need to model up the top and bottom mating shapes needed to create the desired effect on your blank. Rather than mill this shape out of solid steel the trick is to break it into slices that can be laser cut. You have to give some thought to orientation of the bends and which orientation of your laser cut slices will work best. Your sliced up die will need to have some retaining plates that hold the sliced up parts together. These retaining plates can also receive guide pillars made from threaded rod (12mm diameter used in this example) These guide pillars ensure that the top and bottom parts of the die line up properly. 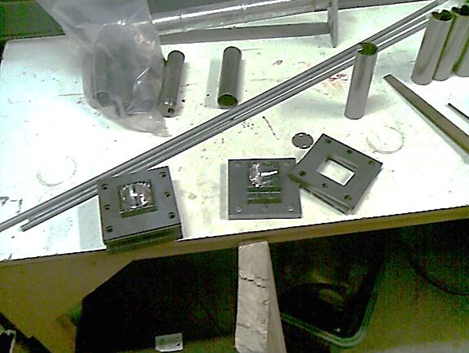 5. Slicing up a 3d shape into 2d slices will obviously give a stepped effect but this can be softened without too much trouble by individually grinding the appropriate edge of the appropriate area of the 2d slice. See the effect bellow. Quite an accurate outcome can be generated through clever use of cad.

6. This little tool cost me about $150 in parts and using a crow bar to strike the die instead of a press tool I made hundreds of parts (a two person job – one to load the blank and one to strike the die) and fabricated them into a larger product which satisfied initial orders until it was clear we could afford a proper production tool.

7. This part doesn’t look like much but I’ve use the technique for a handful of parts and in some more challenging presses which needed more force I hired a ten ton press. See photo and notice the much deeper dish shape produced. When I had an order needing a few hundred units I hired an electric powered hydraulic portable pump and connected it to the press to take the manual effort out of it. Needless to say it was a relief to get to the stage of going to proper production tooling but still this trick allowed much risk reduction in the project and importantly it kept the idea going until the commercial potential was more obvious. Just a minor victory in the designers mandate to triumph good vs evil. 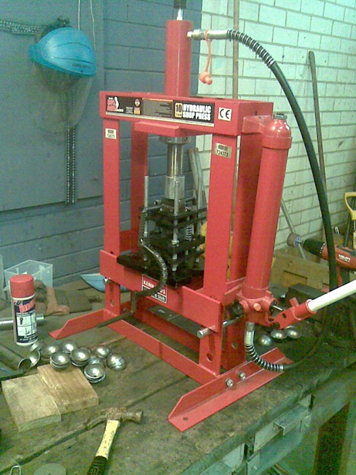 About the author: Josh enjoys thinking up new designs and then watching the creation come to fruition in his workshop. If he’s not dreaming or thinking about a new design he often finds himself pondering the big questions facing our planet and most recently found the ideas presented by the World Transformation Movement to be both fascinating and stimulating