Failsafe: The One Thing Design Students Are Missing

There’s an essential experience that design students are missing. Something no one is telling you to do, but if you don’t do it anyway, you risk your potential to be great. Without it, creativity wanes and designing becomes monotonous. Projects, even entire businesses, can fail without it. You’re missing the ability to fail. You lack the crazy enthusiasm to do something new, unknown, risky. You know your idea is unlikely to succeed, and you avoid new methods in favor of familiar ones. After all, you’ll still get a decent grade and you’ll be able to use the work in your portfolio, right? 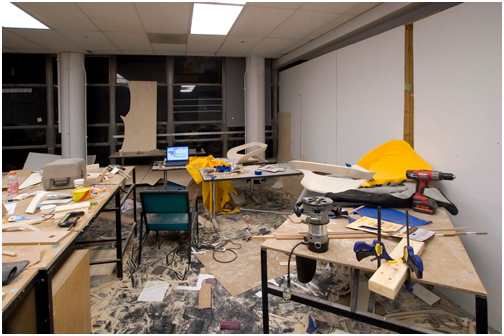 Why are some designers afraid of failure? Don’t we train ourselves to be comfortable with big ideas? Isn’t deferring judgment one of our rules for brainstorming? The truth is that designers are more comfortable with failure than most, but the fear is so deeply ingrained in our society that we must work hard to avoid it. Over at The 99 percent, research analyst Michael Schwalbe says it best: “Ultimately, it’s the ones who barrel through the discomfort, are resilient in the face of failure, and master the last 30% of taking risk who reach the highest levels of performance.”

I’m here to say that if you don’t swing for the fences as a student, you probably never will. Most of us professionals miss out on the learning that comes through failure, usually because there is too much money or ego at stake for us to take bigger risks. And just to clarify my point, I’m interested in failure on a massive scale. A poorly conceived form, a sketch that is out of perspective – I see these things on a regular basis from students. What I don’t see are lofty goals followed by passionate, even desperate, efforts to make them work. Let me tell you about a recent student that took on one of these projects.

“Only those who dare to fail greatly can ever achieve greatly.” – Robert F. Kennedy

Max Schlachter grew up in a house full of mid-century modern furniture. With much admiration for the bent plywood in his parents’ living room, he anxiously awaited the chair project assigned to every fourth year ID student at the University of Cincinnati. “Everybody wants to make a cool chair but each person’s parameters are markedly different. I think for the furniture guys it’s a chance to prove yourself and that’s what this project was for me.” 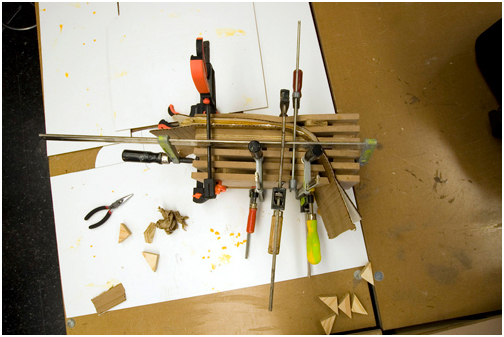 Max decided to “prove himself” by designing and building a chair featuring double-curved bends in solid wood. For reference, most of UC’s wood chair projects bend plywood in a single direction, and they usually turn out pretty nicely. Using solid wood and bending it in two directions is daunting, like dropping into a big half pipe for your first time on a skateboard. “The first big challenge was to see if I could even make the compound curves. I made a small steam box and compression mold of a tricky spot and steam bent some 1/8″ birch plywood. It bent well and was amazingly strong.” His first test was a success, so Max pushed ahead while skeptics still told him to reconsider the design. 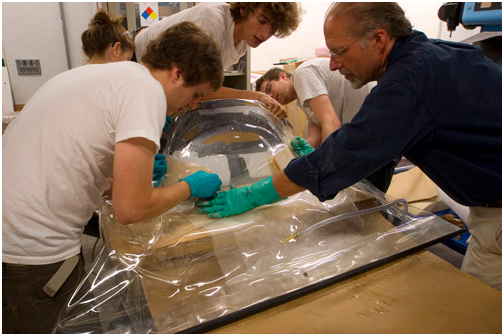 “Creativity is allowing oneself to make mistakes. Art is knowing which ones to keep.” – Scott Adams

“UC’s Rapid Prototyping Center acquired a vacuum press, which was fantastic for me. However, none of us had used one before, so there were some hiccups and concerns along the way. It was terrifying and thrilling. After that, I panicked for a day avoiding the first cuts with the jigsaw. I changed the blades compulsively, and I actually fell asleep with the sander in my hands changing the paper.”

In the end, Max presented a well-conceived but incomplete chair at his final critique. His presentation and body language read like a man broken by his project, but that’s when I knew how valuable this experience would eventually be to him. When I asked him what he learned building the chair, here is what he said:

–          Tests are a valuable hint of what will happen but you cannot fully rely on them to accurately predict how something will go.

–          One worrisome issue can obscure six more serious difficulties down the path.

–          Using a router freehand is terrifying. That terror is compounded when you’re holding the work piece between your legs.

–          Coffee and cigarettes are not an adequate substitute for sleep and food.

Hopefully I’ve convinced you that it’s commendable, even enjoyable, to take a big risk on a project, even if you fail. Before you dive in, there’s a right way and a wrong way to do it. Here are some guidelines:

Don’t go big without a plan.

A big project will struggle without some planning and focus. Remember, the idea is to be unafraid of failure, not to actually fail. Goals should be SMART – specific, measurable, realistic, attainable, and timely. Even though your plan could change mid-process, don’t blindly dive into a big design project without thinking throught what it will take to be successful.

Passion (not caffeine) will carry you.

Don’t make a big goal for yourself if you’re not excited about the journey. While you’re at it, share your ideas and build a network of excited friends for support. Max aimed high with his chair because he knew his passion for furniture would carry him for ten weeks of trials. I often challenge students to reinvent a project so they’ll have more energy for it.

Not every project should be a huge undertaking. Failure is only one way we learn. Early on in your design education, there’s plenty of room for failure, but you also need to be building a strong base of skills. As you near graduation, you’ll want your thesis project to be lofty, but you also need it to be a comprehensive portfolio piece. So when’s the best time to get risky? My recommendation is to time your risks to occur somewhere in the middle. At this point in your training, you’ll be an informed designer but failure won’t put your professional growth in any serious danger. With one more year until graduation, Max has plenty of time to finish his chair and develop a couple more projects to round out his portfolio.

There are lots of great stories about people who’ve failed during their journeys toward eventual success. Whose story motivates you to overcome the odds?

About the author: Michael Roller is senior industrial designer at Kaleidoscope, where he leads award-winning design efforts on a range of consumer products. As adjunct professor at the University of Cincinnati’s College of DAAP, Michael mentors industrial design students through the Design Communication course. Focused on understanding the dynamics of design within business, he writes about this overlap at the aptly named blog Strategic Aesthetics.

Next post: Less and More – The Design Ethos by Dieter Rams