This is the second part of the ‘Creative Workshop UK – China’ by TECAtech. For part 1 please click here to read.

At the same time as the workshops we asked all the participants to complete a questionnaire about their design philosophy and influences. The same list of questions was used in both countries and the results recorded. In the UK there were eighteen participants, and in China we conducted two workshops with a total of seventy four participants.

Our results are based on the questions completed; the answers were grouped into ‘agreement’ or ‘disagreement’ and given as a percentage of the total.

We asked the designers to tell us what inspires them in their work; ‘Nature’ was a major inspiration on both sides. ‘The internet, exhibitions and shows’ all had similar importance in both groups.

For the Chinese, over half the designers stated ‘Poetry’ and ‘Traditional culture’ was an important inspiration to their design process, many of the Chinese even stated Chinese food as an influence. Few of the UK designers referred to UK culture or poetry as an inspiring factor. 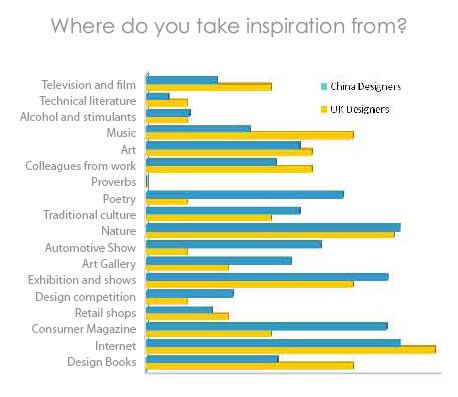 When asked about their design philosophy, the Chinese designers placed great importance on the ‘Chinese landscape’ and ‘food’ (72% and 66% respectively felt it was important). On both sides ‘technology’, ‘popular culture’ and ‘fashion’ were seen as important and ‘religion’ as unimportant in their
approach to designing.

In general a stronger nationalistic feeling from China was apparent in their design philosophy. The role of ‘super-star designers’ had far less influence to the UK group than the Chinese. 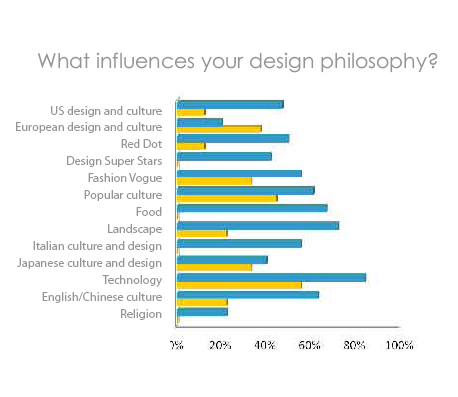 We asked what the important factors might convince someone to buy an expensive product.

‘Brand value’ and ‘beauty’ were highly important from the UK perspective. In China an ‘international reputation’ was the most valued with ‘advertisement’, ‘expensive material’ and ‘technical functions’ followed closely. 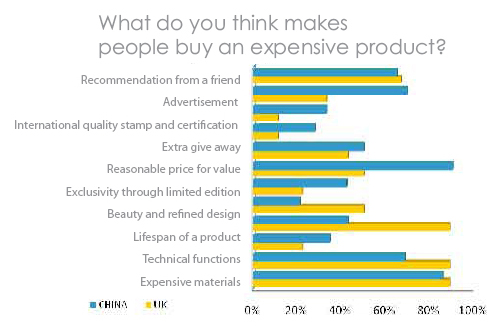 When we asked about inspiring designs, the Chinese were very proud of their ‘birds nest stadium’. The ‘VW beetle’ was liked by all and the Chinese designers were particularly fond of the ‘umbrella’ and ‘scissors’, giving their lowest score to the ‘Swiss army knife’.

We asked the designers about important factors in their professional design practice. Both the UK and Chinese gave similar importance to ‘environmental issues’, ‘ergonomics’, ‘generating sales profit for their clients’ and ‘design for manufacturing’.

Inclusive design was rated higher in China with 78% as opposed to just 28% in the UK. However the importance of a certain ‘X-Factor’ to design was the highest rating in from the UK designers with 83% feeling it was important. In China most designers did place very much value on this element. 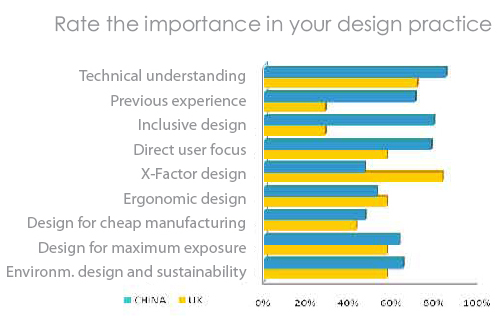 We asked the designers what purpose they felt their designs should fulfill. In the UK ‘beauty’, ‘personality’,’ fun’, ‘pleasure’, ‘practicality and simplicity’ were all equally important. For the Chinese designers ‘comfort and convenience’ and ‘practicality’ were given 100% support. More importance was
given to ‘ making technology comprehensible’ in the Chinese group which seems to reflect a more practical engineering purpose to their approach than their UK counterparts. 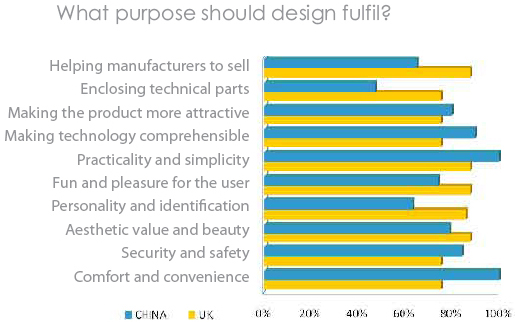 We wanted to know how different nations were viewed in terms of their design influence. We listed seven contenders and were surprised to find ‘Germany’ and a clear winner for the Chinese. 83% of the Chinese designers felt ‘Germany’ was important. ‘Italy’ came next with 70%, then ‘Finland’, the ‘UK’, ‘USA’ and ‘France’. In the eyes of the UK designers the ‘UK’ and ‘Italy’ were evenly split with 62%, ‘Germany’ and ‘Sweden’ came next, both with 50% support and ‘Finland’ came in last with just 12%. 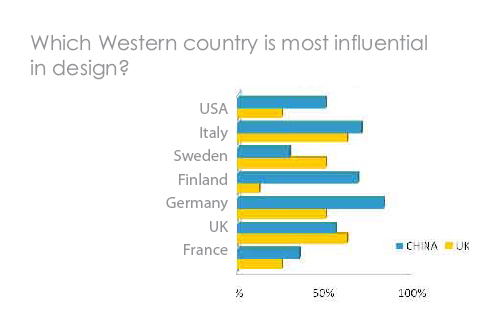 We were interested to find out ways of improving UK and Chinese collaborations, so we asked which things were the most important for a UK-China collaboration to succeed. The ‘financial’ side of things was most prominent in the Chinese answers. 90% believed full disclosure of project finances were most important, followed jointly by ‘profit sharing’, ‘shared management’ and ‘daily updates’.

Rather than a preference for ‘personal agreements’ as we had expected, 80% of the Chinese designers felt a ‘detailed contract’ was particularly important, with the ability to speak English the lowest score just 43%.

From the UK perspective, 100% importance was assigned to ‘frequent meetings’ (just 62% in China), and having an ‘English speaker in the Chinese office’ followed at 58%. For the Chinese designers, working with a UK partner who understands Chinese culture was of major importance and most felt very strongly about this area. 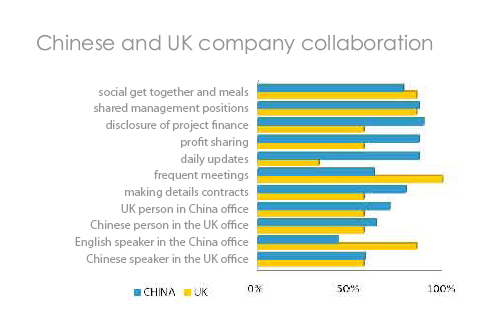 When asked ‘why did you decide to become a designer?’ we found 95% in China felt they wanted a ‘creative job’, and 100% in the UK
were motivated by their interest in ‘making things’. 66% of the Chinese designers saw the design industry as a ‘business opportunity’ compared to over 70% in the UK feeling design was not a good opportunity for business and ‘earning a good living’ was not a factor (0% in the UK were motivated in becoming a designer to earn them a good living compared to 42% in China). The working environment was also seen as an important factor for the Chinese with 82% expressing this as a reason, only 14% for the UK. It seems commercial opportunities and a chance to work in a new and exciting industry were major factors for the Chinese designers. 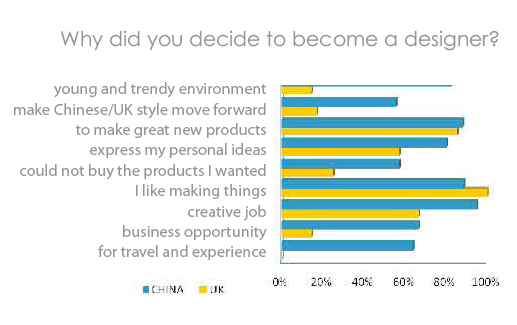 The Role of Design

To find out more about the general role of design in each country we asked which factors were important in the designers’ own job. For the Chinese designers, creating ‘new designs for their own country’ was the most important aspect of the job with over 70% support.

In the UK ‘building a new brand name’ was the highest score with over 88%. Bringing something ‘completely new’ to the market was more important for the UK designers with 77% in agreement compared to 64% in China.

Neither side felt pleasing the boss or getting the job done quickly was very important. The UK designers seemed much surer of their role with clearer positive and negative answers than the Chinese. 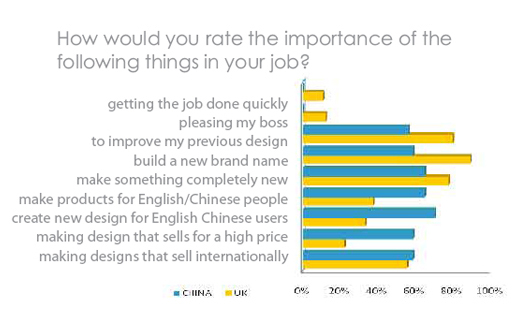 Both the Chinese and UK gave similar answers about the ‘years of study’ needed, however none of the Chinese felt more than five years of ‘professional experience’ was required to become a good designer, the majority of UK designers felt 6 to 10 years was needed.

We asked about the ‘careers’ of their classmates, many in the UK said the people they studied with worked outside the design sector or had their own business. In China a large proportion of their classmates worked in the design department of a factory. Finally we asked which colleges were the best to study design in each country. In the UK, ‘Royal College of Art’, ‘Central Saint Martins’ followed jointly by ‘Goldsmiths’ and ‘Loughborough’ were listed. In China ‘Zhejiang’, ‘TongJi’, ‘QingHua’ and ‘Beijing’ Universities were all highly rated by the Designers.

The questionnaire results show that the Chinese and UK designers have similar motives for their choice of profession and are inspired by similar things. However, there seems to be a big difference in the designers’ objectives and the purpose they feel design fulfills.

For the Chinese designers Chinese tradition and culture is very important and there is strong feeling of national drive and improvement. The UK group was more individualistic and clear about their role, as well as feeling comfortable designing for a wider customer base. They were much happier to take ownership of their designs and objectives than the Chinese group.

For the Chinese designers, ‘poetry’ and ‘traditional culture’ inspire and influence their design along with other important aspects of Chinese history such as the ‘landscape’ and ‘food’ of China. These all add together to create a strong and proud national identity which is reflected in their work.

The Chinese design group valued ‘international reputation’ and were very aware of the power of ‘advertising’ but still showed a preference for ‘technical’ features and functions of products above style and beauty.

There was little understanding of intangible qualities such as an ’X-Factor’ marking one design above others. The aesthetics and beauty were always secondary to a practical and functional solution. The style and design of Germany and Finland were well respected amongst the Chinese designers reflecting the value placed on engineering.

When collaborating with the UK, ‘financial’ aspects and ‘clear contracts’ rather than language problems were highlighted as well as equality and transparency with shared benefits and responsibilities. Although Western culture is valued and respected, the importance placed on national customs and traditions cannot be underestimated. Business partnerships with more understanding and interest in Chinese culture will have much greater success.

Many of the Chinese designers saw a chance for travel, new experiences and financial opportunities in their choice of profession. A strong desire to design and make products ‘for China’ was apparent with a general feeling of national development and advancement. However the need for training and experience was underestimated. A real understanding of the quality and precision attained in some of the world’s best design was not evident; this can be easily judged by the time needed to create a new design. 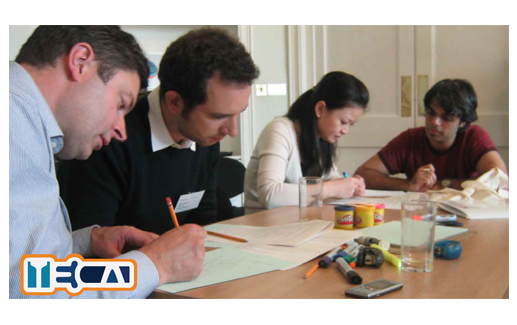 The UK designers were more practiced in producing design that worked internationally. ‘Beauty’, ‘personality’, ‘fun’, ‘pleasure’ and ‘simplicity’ were important features for the designers. Inspiration came from a variety of sources but had a more global perspective.

The UK group had a very different perception of the role of design and its wider business application. The overlap into ‘research’, ‘marketing’ and ‘branding’ and the importance of working in a more integrated way was evident. The UK designers were more used to the process of ‘thinking outside the box’ and some of the ideas were very conceptual and forward thinking but because of this not so suitable for manufacture.

Interest in a refined and ‘beautiful solution’ rather than ‘technical features’ shows a more artistic tendency in the UK group and a different understanding of aesthetics. An ‘X-Factor’ in making a design successful was seen as one of the most important elements to the designers.

The design profession was viewed in the UK as a constant learning process always improving and developing, a view different from China where previous experience in a product category is essential for winning work. Cross fertilization of ideas and technologies, lateral thinking and reliance on a well developed process rather than repeating similar projects was much more characteristic of the UK group.

This article was submitted by Dina Guth, business director of TECAtech.

TECAtech was founded in 1998 and is an internationally active Innovation and Design Company. It is the first UK design company to open a permanent office in China. We produce totally original design and innovation to top international standards. They have worked together with companies like Thomson, Procter and Gamble, Mitsubishi and RCA to produce market leading product solutions which sell globally.